Noisefloored is a showcase for adventurous live music in Edinburgh featuring local, national and international artists, many of whom are regular users of the studio. 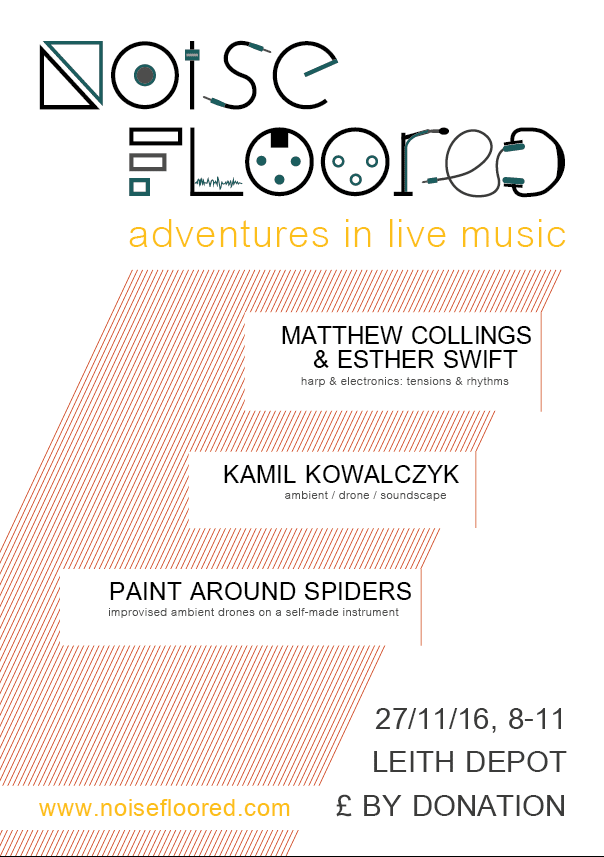 Noisefloored returns to Leith Depot for another exciting lineup of forward-thinking live music. This time we have drones, self-made instruments and a rather special harp & electronic collaboration between 2 of Edinburgh’s finest!

8-11pm, entry by donation (suggested £4+) with all proceeds going to the artists.

Kamil has always been interested in sounds, particularly “electronic sounds”, ie those created through using artificial devices like
synths or through of the synthesis of different kinds of sounds, or “anything in-between”.

He is also running a concert series in Edinburgh called Soundscapism (Soundscapes Concert Series), a series of performances which are focused on ambient, drone, soundscape and space electronic music.

In conjunction with our Ableton Live Masterclass, the inaugural Noisefloored event features artists who use acoustic instrumentation, electronics Ableton Live as a performance platform.

Planetary Cymatic Resonance
P-C-R is a musical project based on tunings calculated from natural frequencies found in our universe, such as the movement of planets or the resonances of molecules. Devoted to human well being and the resonant recalibration of people to their sonar origin, we create a symbiosis between the sound of acoustic and synthesized instruments.

Timo Preece, one half of P-C-R, will be hosting The Noisefloor’s Ableton Live Masterclass on the 24th & 25th September.

Jess Aslan
Expect analogue synths, drum machines and reactive computer software for an auditory assault on the senses. In other guises Jess plays synths with The Girobabies and The Victor Pope Band, as well as being one half of noise/acoustic duo KUBOV.

The Reverse Engineer
The Reverse Engineer is Dave House: a digital composer, sound artist and graphic designer based in Edinburgh, UK. Inspired by the patterns, textures and decay of natural and man-made systems, Dave creates polyrhythmic soundscapes from algorithms, field recordings and everyday objects.

Dave is also the founder of The Noisefloor.