August is Festival time here in Edinburgh as the city plays host to thousands of different shows covering every creative sphere imaginable. Here at The Noisefloor we’ve been happy to help a number of visiting artists record their voices for various projects.

The Fringe is perhaps best known for comedy and while Philip Nitschke’s show Dicing With Dr. Death is certainly funny, Philip uses comedy to explore a controversial and important subject: assisted suicide. A somewhat notorious figure in his native Australia, Philip has been making the argument for euthanasia for 20 years and helped 4 people to die while it was briefly legal in Australia’s Northern Territory.

During his festival run Philip was interviewed by prominent compere Andrew Denton, who asked the questions back in Melbourne while we recorded Philip’s thought-provoking responses at The Noisefloor here in Edinburgh. The interview will be available as a podcast in October, once the two parts have been merged and mixed. We’ll post a link as soon as it’s online, so watch this space. 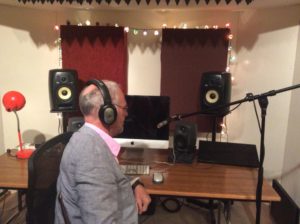 “The Noisefloor is a nice place, quiet, in the building basement, you could hear a pin drop as manager Dave set up. For around 50 minutes I was able to argue with Denton on topics ranging from the politics of death comedy, to the risks and benefit to society of issuing the euthanasia drug Nembutal to everyone over 50. I was happy with the interview. Thank you Noisefloor! Thank you Dave!” – Philip Nitschke

Another Australian, comedian Craig Leggo, visited the studio with his partner Laura to record their upcoming comedy podcast On The Wireless. Craig and Laura play Dot and Elspeth, two old ladies chatting and bickering at their nursing home. Settling in to character in the studios comfy surroundings they made use of our DPA lapel microphones (favourite of Broadway and West End shows) and a few props, laying down several 25 minute episodes over two marathon sessions! Our engineer was on hand to help them with the technical side. Again, we’ll post a link to the podcasts as soon as they are live. 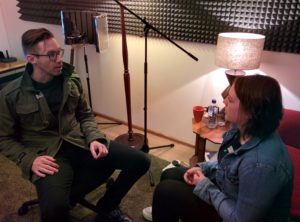 Craig and Laura as Elspeth and Dot, respectively

Previously The Noisefloor has been used for voice work by voiceover artists, film makers and sound artists – plus, of course, singers! Our range of microphones and gear make for a versatile recording environment, so next time you need to record vocals, get in touch!