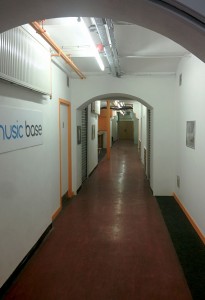 The main corridor of Music Base. The Noisefloor is near the bottom, on the left

The Noisefloor is (or will be) a shared facility for audio creativity – a sound lab for experimentation, sonic exploration, production, art and design. Falling somewhere between rehearsal room and recording studio it will offer what many people sorely need for their audio practice: a dedicated, affordable, sonically treated, professionally equipped space in which to work.

The concept is based on a studio set up by a friend in Berlin. Being Berlin it wasn’t too hard for him to find a suitable home for the project, namely a 1980’s ex-GDR office block, now given over to musicians. My friend treated the room, decked it out and sublet the space at fair prices to fellow musicians and sound artists. I spent every Monday afternoon there and produced some of my best work to date, delighted to leave my reverberant and neighbour-bothering lounge room where I previously made do. “This”, I often thought during my year in the city, “needs doing back home”.

So when I returned to Edinburgh at the start of 2014 I straight away began the hunt for a suitable space. Unsurprisingly there are fewer options here than in Berlin, but after much hunting I found <a href="http://www.music-base check out here.co.uk/” target=”_blank”>Music Base in Leith and within its sprawling basement the room that will shortly become The Noisefloor. 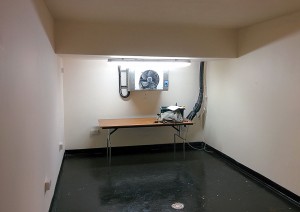 The larger of the two rooms (still with industrial cooler on the wall!)

The space itself has a noble history as a beer cellar, although it is many years since it has been used as such. It consists of 2 rooms, the smaller of which will serve as gear storage and a workshop for hardware hackers, instrument builders and anyone who likes getting their hands dirty. The larger room will be the studio itself and it’s this that we have been focusing our attention on (we being Dave House: digital composer, sound artist & graphic designer, plus Ross Taylor: acoustician, musician and DIY guru).

The space, which measures around 7m x 5m, is a solidly built structure within a large, stone basement. Down the corridor is a photography studio, up the other way are a private sound studio and some rehearsal rooms. Music Base, a new ‘creative music centre’, has a great buzz. Once fully up and running it promises to be a thriving and diverse home for audio creativity in Edinburgh.

Being around fellow artists is, of course, inspiring, but it means that proper consideration needs to be given to sonic treatment. Since The Noisefloor will be a production suite as well as a recording space it is important to keep noise out as well as in. The first priority, therefore, is to soundproof the room as much as possible and I’ll talk about the initial stages of that process in the next post.

I’ll use this blog to continue documenting the development of The Noisefloor right up until its launch in January 2015, so check back often! The full website will also be up soon detailing facilities, pricing and some special pre-launch deals. 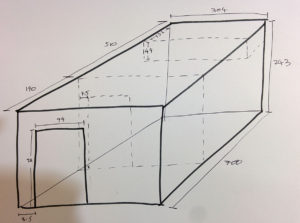 Not-to-scale sketch of the space 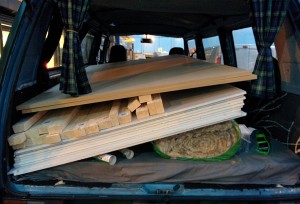